THAT was a good day. Somehow, I’m a little less excited about what’s going on. Don’t get me wrong, I’m a happy camper. The guy just needs to sack up a little bit. 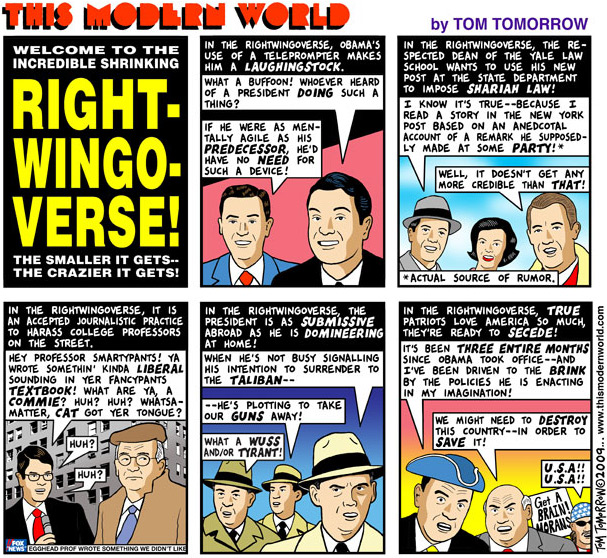 This pretty much sums up how we feel about gay marriage in Awesome Town. If two people love each other, and want to express their love for each other, what’s so wrong about letting them get married? Where’s the harm? It is unconstitutional to legislate inequality. Our generation doesn’t care. We don’t mind. Go ahead. Knock yourselves out and more power to you. It’s a beautiful thing when two people get married. There’s a movement going on right now. First Iowa, then Vermont. Now D.C. is recognizing gay marriages from other states. I’ll tell you what, it’s not going to stop there.

Far be it for me to criticize public figures and politicians from taking a quick cat nap every once in a while. I’ve been known to count sheep during meetings with my political staff, speeches, public events, weddings, funerals, and bat mitzvahs. Being a Mayor is tough on a guy. But as of yet, I’ve been un-photographed, unlike these poor souls: 
Yes, conservatives are almost as oppressed as white Christian men in America.

Politifact.com has a nice list of campaign promises made by Barack Obama and the current status of those promises. You can check it out here. It would have been nice to have a list like this for the last administration handy, and also a list of all of the scandals the GOP was dealing with. It seemed like for a few years, there was a new scandal every week. There were simply too many to keep track of. With this list we can at least keep track of this administration’s promises. Here’s a link to the only (so far) promise that has been broken. Charges: It’s a remarkable achievement in unconscious projection that the author of a book called Unhinged could lose her fucking marbles over a patterned scarf in a donut ad, but that’s what Michelle Malkin did when she sounded the nutbar clarion call and sicced her half-cocked league of masturbators on Rachel Ray and Dunkin Donuts for the flatly absurd notion that they were sending a message of solidarity with Palestinians. Right, Michelle—you just can’t sell donuts without joining the intifada these days. What did the nauseously spunky Ray do to incur the wrath of the Malkinoids? She wore a black and white scarf. A paisley scarf. A scarf that was clearly not a kaffiyeh, which, by the way, is just a hat that Arabs wear, not some universal symbol of jihad. In terms of completely false outrage, the only thing that rivaled this travesty of reason this year was the “lipstick on a pig” metaphor panic. But what puts this embarrassing sham over the top is that Dunkin Donuts actually apologized and pulled the ad, rather than try to explain to the fact-phobic horde that they were just blind, raging idiots with the collective brain-power of a lobotomized howler monkey.

Exhibit A: “If your neighbor’s got an “Obama ’08″ bumper sticker or lawn sign, you might want to double-check your door locks at night.”